I am so curious to find out what these yellow droplets of oil inside my grain spawn could be. 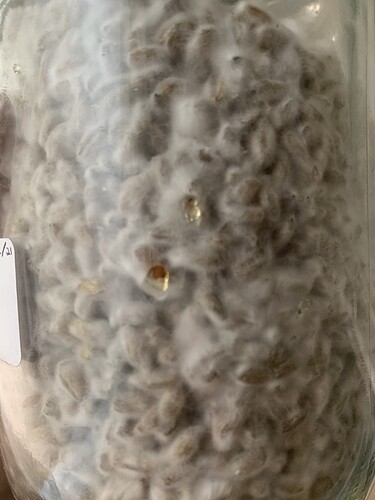 Is it the oil from the grain, metabolites exuded by the mycelium or some unwanted contamination?

Love to get a second opinion on the matter.

metabolites exuded by the mycelium

Here’s an example of similar behaviour from Pleurotus eryngii mycelium: 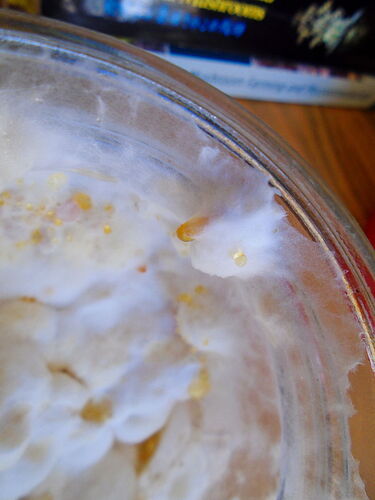 Thanks so much @glyph - that really puts my mind at ease.

That looks like some healthy mycelium you got there by the way.

on really myceliated jars,
I’ve sometimes seen this little bit of reddish stuff on top…
do you think this is also metabolites or contamination?
it seems to happen close to where the filter is 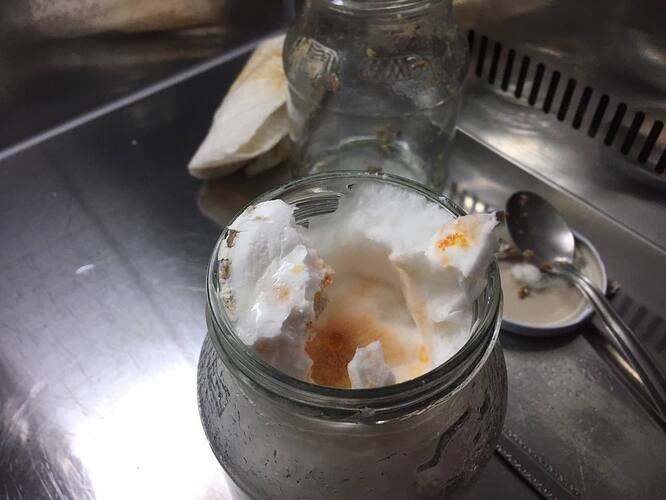 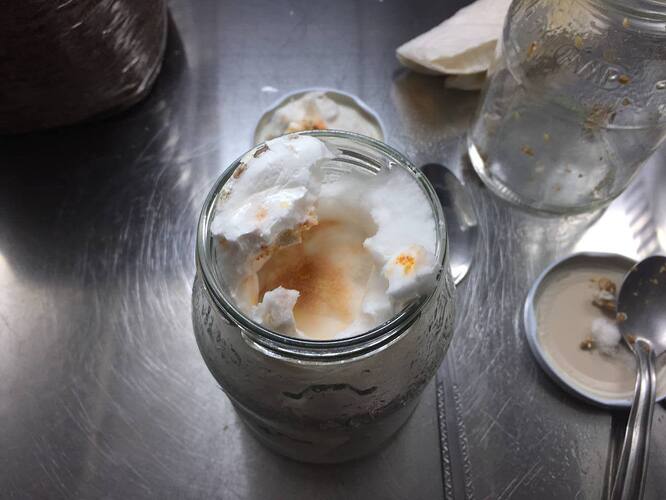 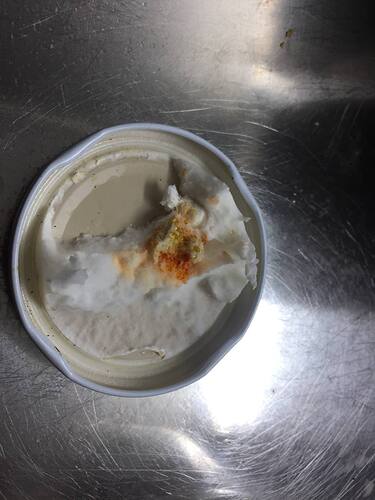 In this case it seems to me that what you’re seeing is a response to bacteria or some other microbial life at the filter. This doesn’t necessarily mean that the jar is contaminated, but that the defense mechanisms of the mycelium have been activated.

As a side-note, do you usually leave your jars to reach this level of myceliation before transfer? Or is this an outlier?

@glyph aw interesting… that makes sense, it kind of looked like something the mycelium was also making … but also doesn’t look super happy…

I would say I don’t intend to let my jars get this myceliated before transferring, but my rhythms aren’t always very consistent so it happens sometimes.

I’ve also had a couple times where a fully myceliated jar sat around for months, and then I used it for bulk inoculation and it still kept growing well. Our first fruits in the fruiting chamber were actually from a batch that I had kind of considered as a throw away, like this spawn is really old its probably not going to work but might as well try it…

I would say I don’t intend to let my jars get this myceliated before transferring, but my rhythms aren’t always very consistent so it happens sometimes.

This happens to all of us

I’ve learned a lot from observing mycelium in jars which sat for far too long.

While it’s not always possible, using your grain spawn right at the point of complete myceliation will give you the best results. I think of it as a wave: I want the wave to flow unimpeded and uninterrupted from agar → LC → grain → bulk. When this flow is achieved, the pace of mycelial expansion and resulting flush of mushrooms can be astonishing. A good goal for us all to work towards.

@glyph that’s helpful info to hear this could effect growth rates and flushes
… relating to conversations about senesence, and undoing some of the effects of senescence by introducing the mycelium to new substrates, makes me wonder if the wave can be stopped & restarted,
or other dynamics of this … like

case A: if you let your agar plate sit for a long time so its too old, but the take the agar to LC, and then basically follow the wave from there with good timing to bulk to fruiting

possibly a complicated question with many possible variations and experiments one could do. maybe another way to rephrase this question… what really is mycelium anyway? is it a particle or wave?
(I’m playing around not because I don’t find the information helpful and interesting, but just because the sun came out in berlin and everything seems funny right now)

High on sunshine, ain’t nothing wrong with that!

what really is mycelium anyway?

How many lifetimes do you have? Particle and wave? Depends on the observer?

Now I’m thinking of some drone footage I once saw of a flock of sheep being shepherded by sheepdogs (might have been one dog, can’t remember). Wonderful illustration of particle-wave dynamics. But I digress! I think in both the cases you presented, there would be slow growth in the first post-pause transfer and then it would (usually) speed back up from there. That first transfer is used to get the momentum going again (sometimes this can take several transfers through several different media - especially if the mycelium has been sitting for a long time).

I hope you get to enjoy the sunshine!

mmm interesting – if we imagine momentum as a variable,
do you think the momentum at the time that fruiting begins can effect the flush size / biological efficiency?
or mostly just that momentum effects how long it takes to get to full colonization?

do you think the momentum at the time that fruiting begins can effect the flush size / biological efficiency?

I believe so, though I don’t have hard data to back it up. I’d love to see what the literature has to say about this! Might also be a nice set of experiments to run here on the forum.

Some excerpts from Stamets on this topic of incubation time and momentum:

Ten to fourteen days after inoculation, incubated at 75°F (24°C), each jar should be fully colonized with mushroom mycelium. If colonization is not complete 3 to 4 weeks after inoculation, something has probably gone awry with the process. Some of the more common causes of slow colonization include unbalanced moisture content, contaminants, weak strain, residual fungicides in the grain, poor-quality grain, etc.

Spawn at the peak of cell development is the best to use, correlating to about 2 weeks after inoculation. The key concept here: to keep the mycelium running at its maximum potential throughout the spawn generation process. With over-incubation the grain kernels become difficult to break apart. Along the path of cell expansion, it’s important for the myceliated grain kernels to separate so they can be evenly dispersed throughout the next generation of substrates. Over-incubation results in clumping, kernels without structural integrity, and an invitation to disease.

P.s. My apologies for derailing your thread, @Merlyn

one time I ordered spawn from an online supplier that was not fully colonized and was growing so slowly… makes me wonder if they were out at the time, so they just threw a refrigerated piece of agar in there and sent it to me

No apologies needed @glyph. I am enjoying this tangent quite a bit actually - please, dont let me stop you