continuing from this post, here are some updates, with fruits and mysteries.

[image of myceliated bags been fanned with mist by a humidifier]

This past sunday, we had our first harvest, from one of three batches of bags we’ve inoculated and put in the fruiting chamber, the first to fruit.

The main mystery is why one batch has fruited, and the other two batches still show no signs of pins. Notably, the batch that fruited was using ‘home-made’ spawn and the two batches that have not fruited were inoculated with spawn ordered from pilzmänchen, a german mushroom spawn provider.

for a brief backstory on the homemade spawn, earlier this year, in April, I went to a local grocery store called Edeka and bought some oyster mushrooms. I then cloned one of the mushrooms into a petri dish using hydrogen peroxide, isolated the culture over a few transfers, and then took the agar to grain. Over the next few months I expanded this grain a few times with grain to grain transfers. This august, I still had three myceliated jars from this homemade spawn, so I used this for one of our batches of bags for the fruiting chamber (and this is the batch that fruited).

At the same time as we inoculated the batch with the homemade Edeka spawn, we also simultaneously inoculated another batch of bags with pilzmänchen spawn, using near identical substrate recipes, so this is a pretty clear indicator.

Now to give a bit more backstory on the two batches that haven’t fruited yet, in case anyone has any ideas.

For all three batches, we used 1 liter trashbags, filled with used coffee grounds from a nearby coffee shop and sawdust from our woodshop connection, with pinholes poked in the bags during colonization, and small xs cut into the bags after they appeared fully myceliated. We mixed the substrate, and then pasteurized it by pouring boiling water on it and letting it sit in the heat in an insulated cooler for about an hour. We tried to pour just the right amount of water so that after mixing the substrate would be at field capacity, without need for straining.

After letting the substrate cool, we mixed the spawn into the substrate, using this large still air box we made, which probably deserves a whole post in itself (a strange, and somewhat impractical thing we imagined and built, which is basically a large wooden frame with a plastic sheet wrapped over it, with hand holes cut into it on both sides, so that two people can work in the same box at the same time. notably the box has issues with fogging up and making it hard to see, and being a bit flappy which seems not great for the ‘still’ part of ‘still air box’, although to its credit, we’ve had no contaminations so far while using it). 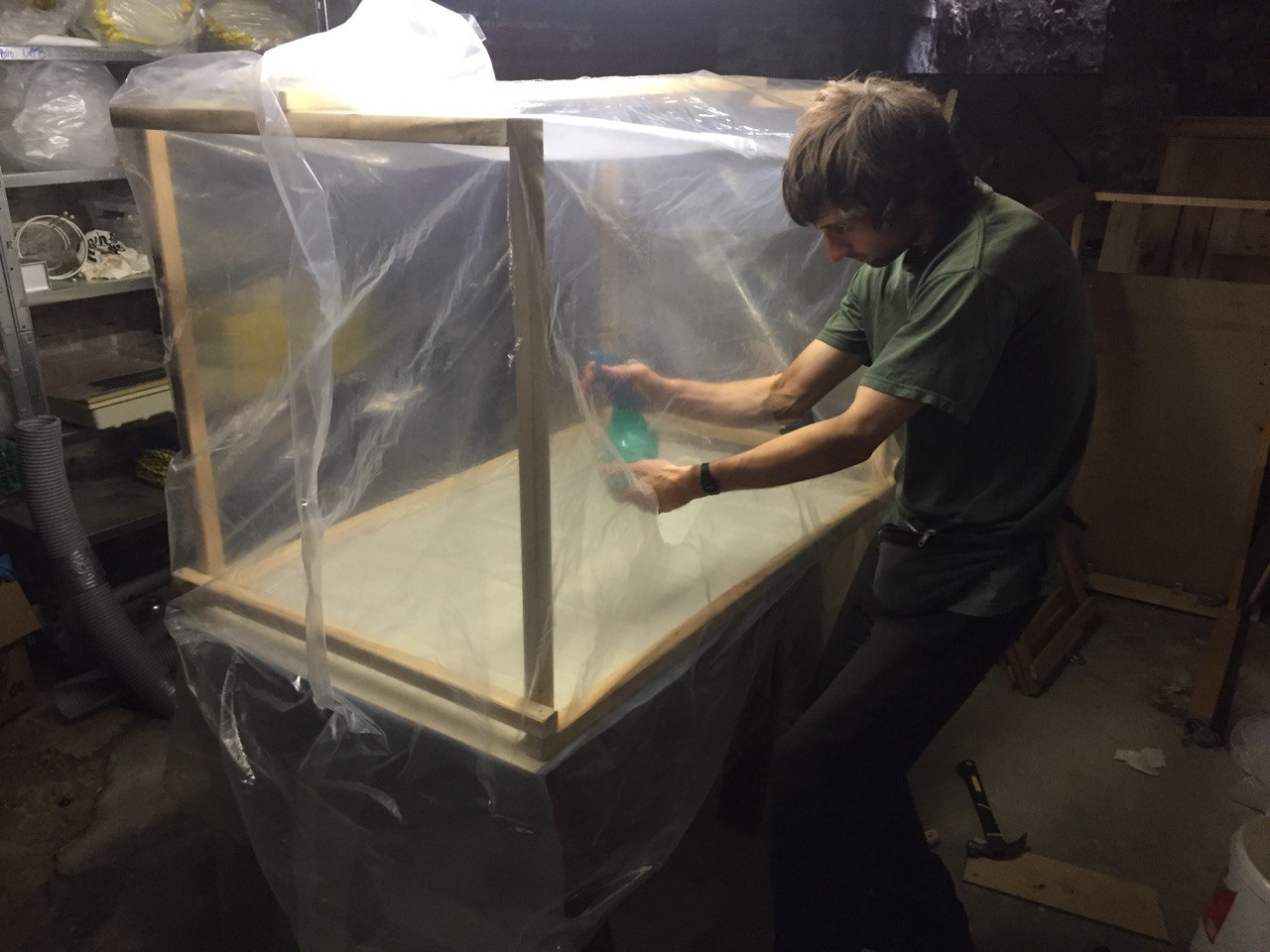 In the fruiting chamber, we have a light set on a 12-12 on-off timer, and a humidifier set on a different timer. A hygrometer indicates that the room usually is between 80 and 100% humidity. We need to change the water on the humidifier every couple days (adapting it with a larger tank and/or a humidity sensor would be a nice improvement).

There is a small fan in the fruiting chamber connected to a tube, blowing air of the chamber.

Here is a lil map: 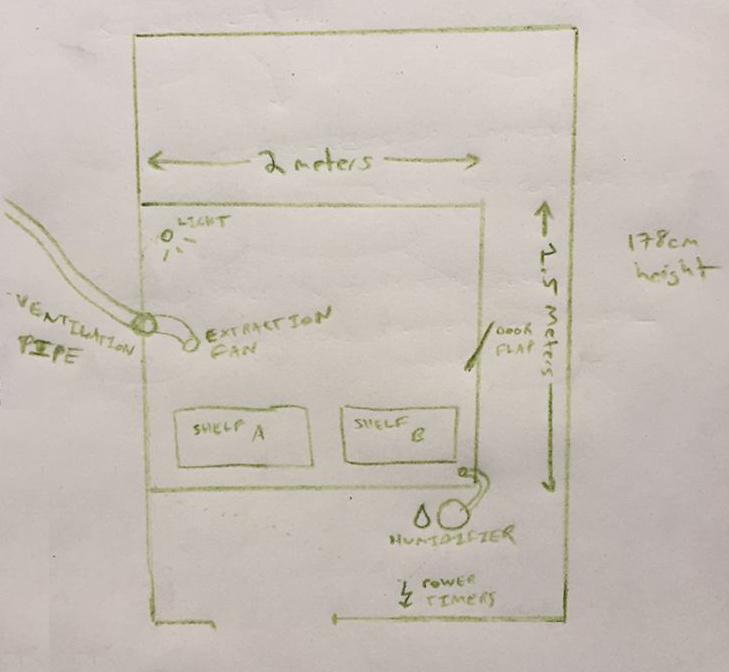 [map of the fruiting chamber]

The chamber is 2 meters long, 1.5 meters wide, 178 centimeters in height, and is essentially a wood frame, with plastic sheeting stapled to it on all sides except for the floor which is tile. One one side, we left a flap in the sheeting which we use as a door (its not airtight).

And here are some more photos: 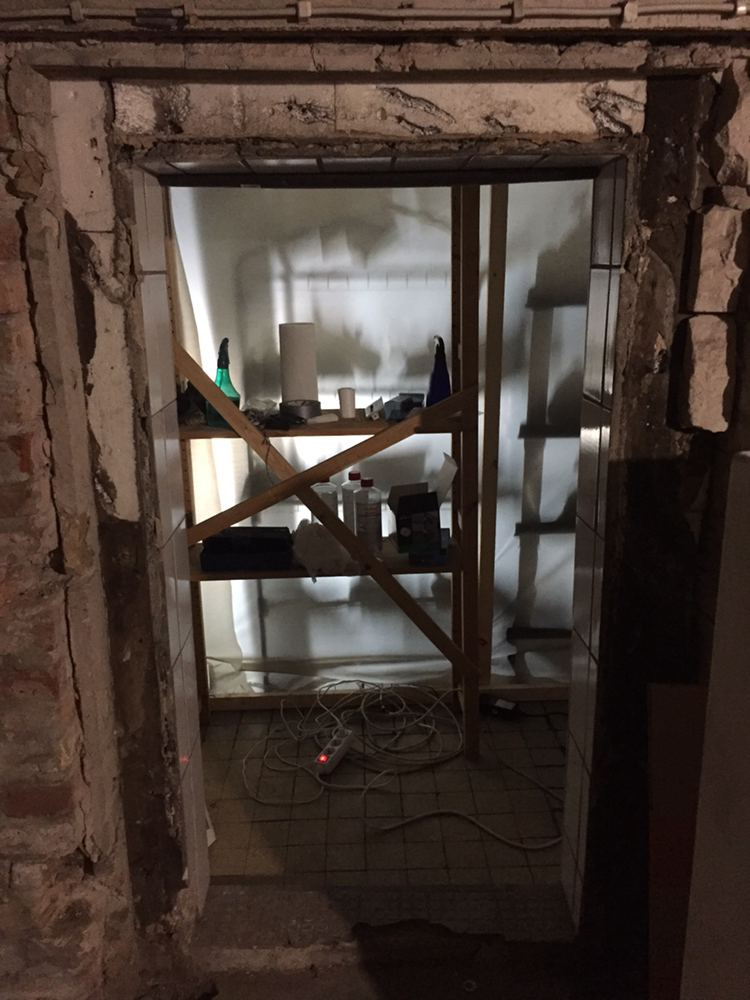 [entrance to the room] 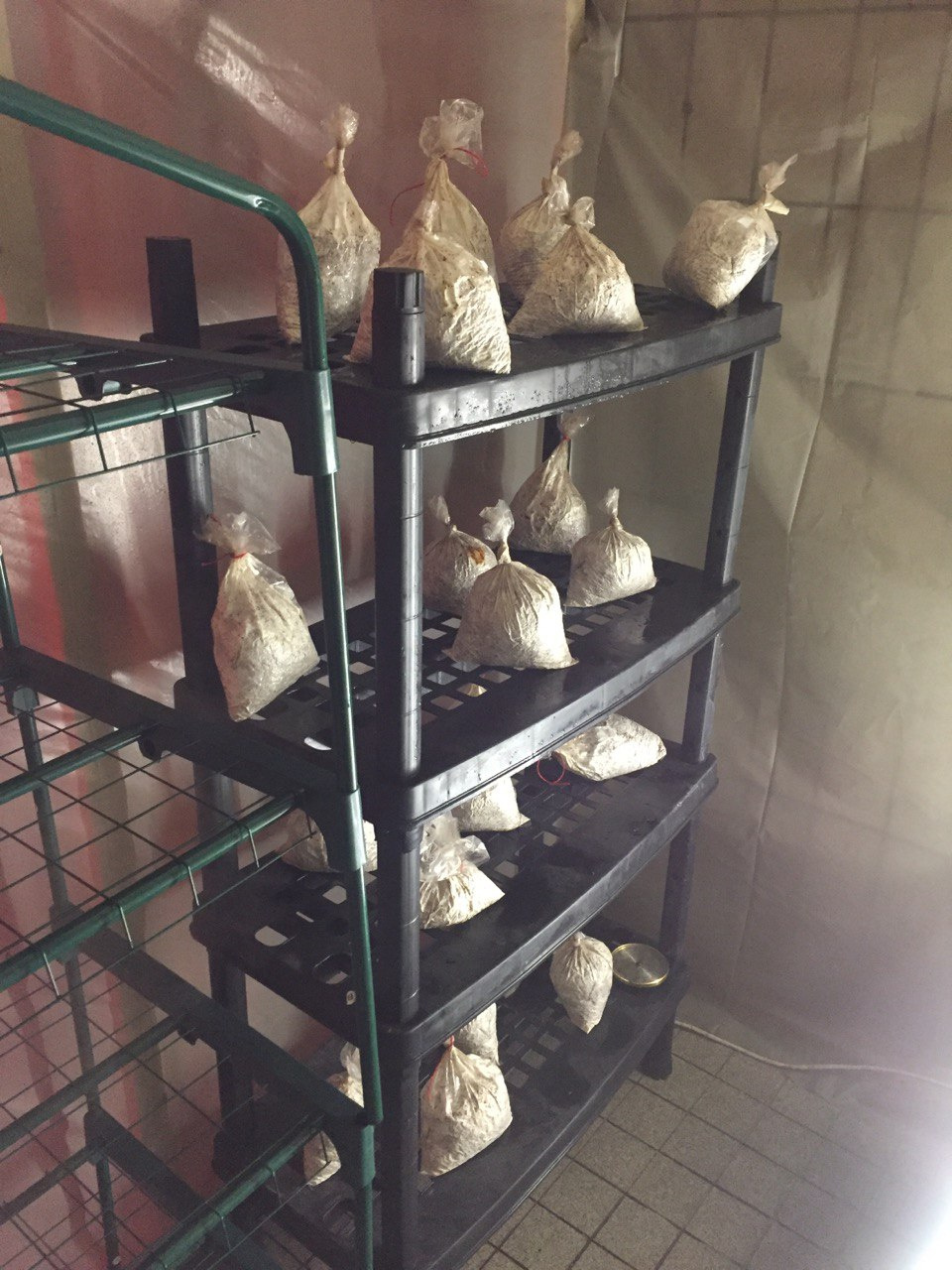 [image of the edeka bags which are fruiting] 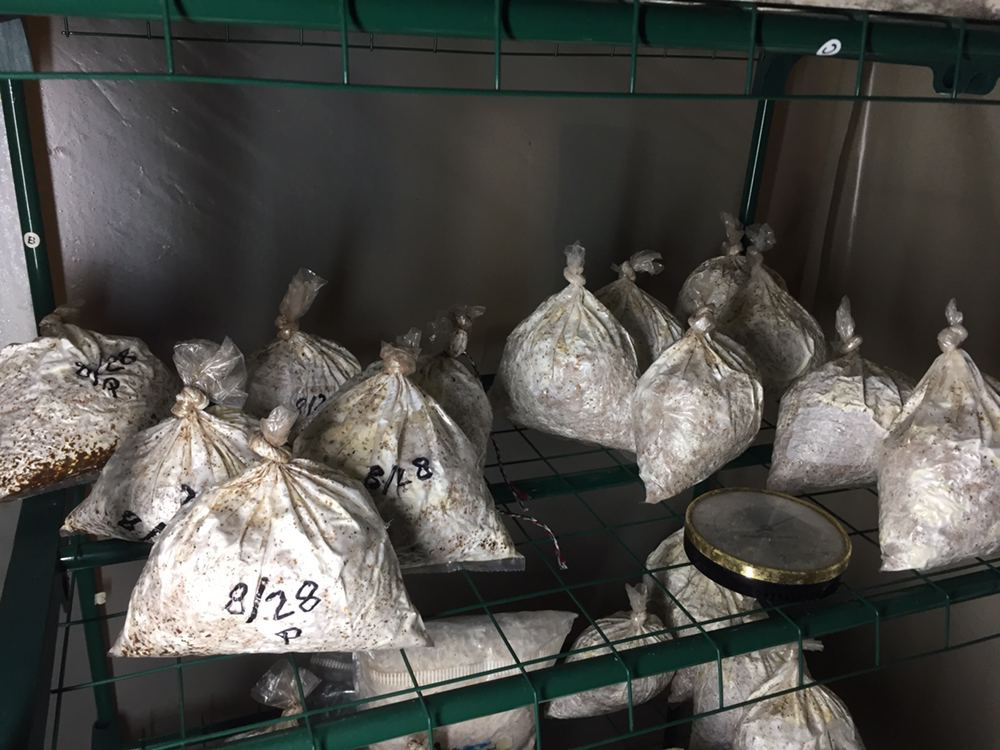 [image of the pilzmänchen bags which are not fruiting]

One of the batches of pilzmänchen bags was a bit dry, but the other batch seems to be over field capacity (as there is some water pooling at the bottom of the bags).

Any thoughts or ideas welcome.

Our current next steps of the project as I perceive them:

To follow up on this mystery, in the end, the pilzmanchen bags also all fruited.
It happened over time and not all at once.
Maybe they were just slower…

The harvest sizes at any one point were not large enough to make nice gifts for others or to sell, so we ended up mostly just eating the mushrooms ourselves (and they were tasty).

Our next step / ongoing experiment, is to try to fruit buckets with more substrate and a larger harvest at one time.