My name is Felix. Since I came to know mushrooms as a little kid, I am a mycophile. That should be enough introduction for now.

This post is some kind of a documentation of the process, but also I want to ask some questions.

At the end of last year I got super excited about oyster mushrooms. I found them in the wild and made cardboard spawn with it. Some more, some less successful. The best outcome was putting whole fruiting bodys inside a zip-loc bag with torn cardboard pieces. 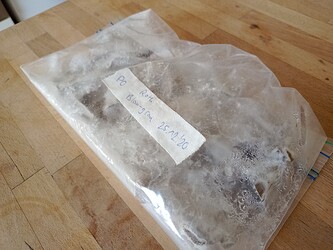 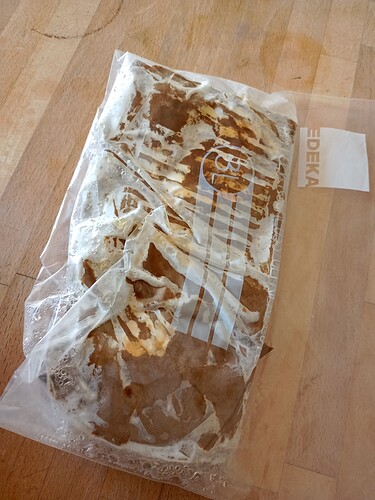 So my plan is not only trying to isolate it onto agar, to work with it in the future, but also to use that spawn to produce fruiting somehow.

The Idea was to put it into a bucket, filled with a mixture of coffee grounds and either cardboard or straw for better texture.

I thought about sterilizing the coffee grounds, because they are not fresh anymore. Then doing a lasagna method alternating between the grounds and cardboard (or straw for that matter).

The volume of the big bucket is 20 Liters, and I also have smaller ones (see picture). 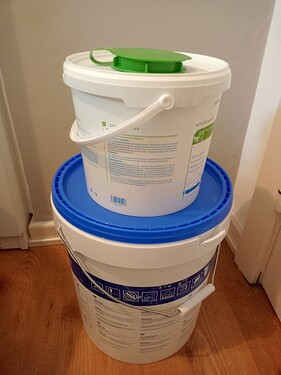 The cardboard spawn wheighs around 100g and I have more than 10 Liters of coffee grounds available.
Does anyone have a feeling for the best ratio of ingredients? A fruiting substrate formula?
A minimum inoculation rate of 10% is recommended probably for something like this?
So for weight that would mean the total mass of the fruiting block should not exceed 1 Kg, right?

Might the 20 L bucket be too big? Should I use growing bags instead?

And also how would you go about having the right moisture content for sterilizing the coffee grounds? They are pretty dry, not fully dry but maybe too dry for the autoclave?

These were just some of the questions that could be asked for this odd experiment.

Any considerations? Any thoughts?
I’m super excited to hear your opinion and suggestions on this!

Until then, thanks for taking the time to read this!

Hi @MyzelFanatiker and thanks for sharing.

I’d say we haven’t totally perfected our process, but we’ve had some good results.

And in this post you’ll see our results comparing substrate with coffee-sawdust percentages 10-90 and 50-50 Too much water in sawdust substrate? - #4 by notplants. It seems mycelium grew faster in 50-50, but we are still seeing fast growth and fruiting in buckets made with 10-90. We’ve been using a 10% spawn inoculation rate most of the time.

I also had been meaning to do some more research to find optimal substrate ratios,
although I’ve also heard others say you may need to experiment with you particular substrates and strain to find the best ratio.

The buckets we’ve been using are 10L, I haven’t attempted anything larger yet. Although I did see @glyph had success with a larger bucket 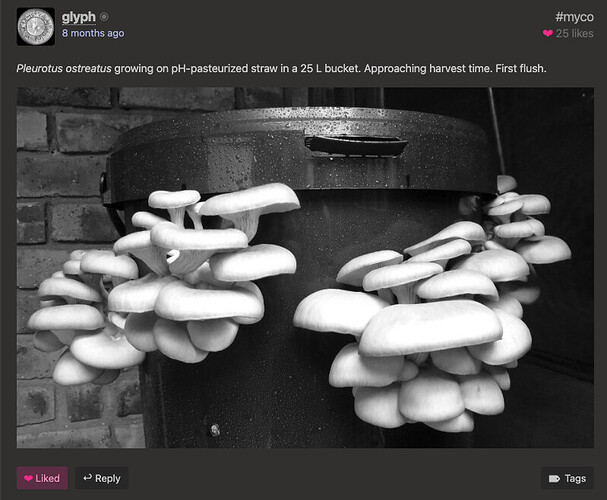 I hope some of this may be helpful and would also be curious to see updates on how it goes as you try it out.

One other little tip,
personally I’ve been finding it helpful to always make at least one grow bag at the same time as I’m inoculating the buckets. Then I can see what’s happening in the grow bag (its transparent) and have a good sense of what’s happening in the buckets. Maybe with more experience I could be more patient with the bucket, but while I’m still wondering if anything is working lol, I’ve found it helpful.

Oh yeah thanks for the comments. That’s very helpful, indeed.
I decided to do the first trial in a grow bag instead of the bucket.

I don’t have enough spawn to run multiple batches yet, but that’s coming in the future.

So now I’d like to know if using coffee grounds together with hemp litter could be enough for a fruiting block. I remember reading somewhere that spent coffee grounds already have an elevated nutritional profile.

If not I’m thinking of adding some kind of bran into the mix, since a lot of people on the internet use that as well.

The formula I’m thinking of would read like this:
70% coffee grounds
20% hemp litter
10% weat bran

Then getting everything up to the right moisture content, putting it into the grow bag and then into the autoclave.

Also, are the ratios usually with weight or with volume?

Please let me know what you think.

P.S. I’m kind of emotionally attached to the cardboard spawn, because it’s my first baby.
That’s why I want everything to work out…

Keep up the good work, and thanks for sharing ideas!